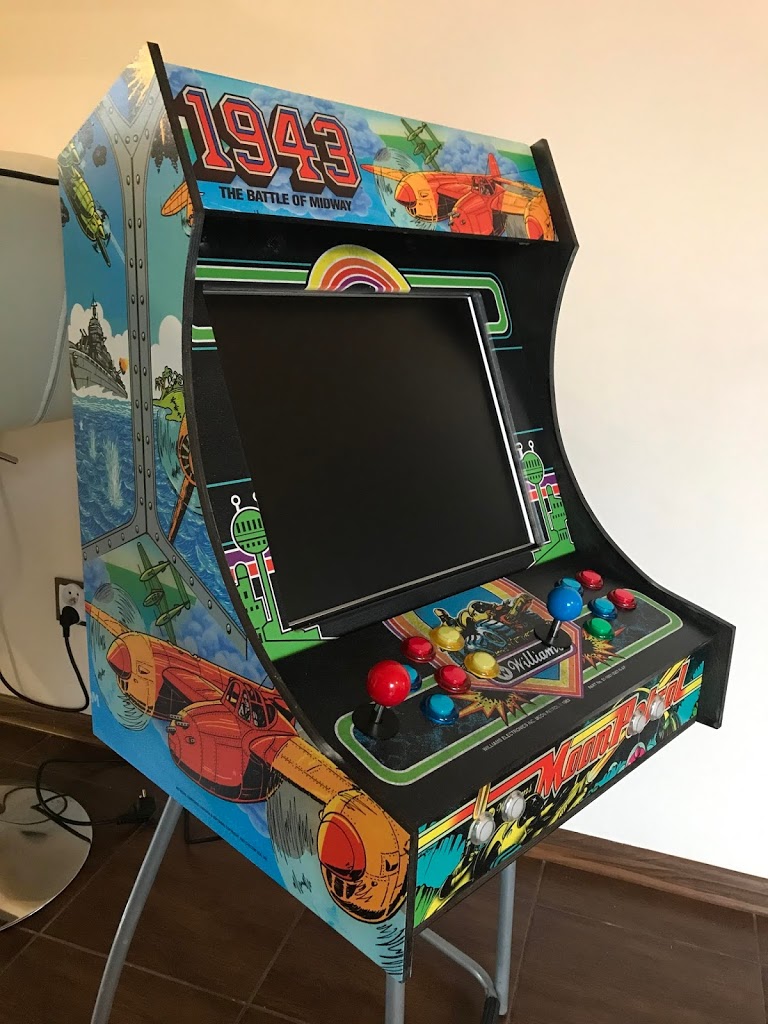 Introduction will be short. Sentimental, a bit nostalgic.

Probably you don’t know how 'Arcade salons’ used to look like 35 years ago in Poland – if not then google 'Wóz Drzymały arcade’. They were not only ugly, but also crowded, smelly and a bit dangerous sometimes. But it was the only place to play games better than on your computer – if were that lucky to have one at home that time! I wasn’t visiting them that often as I would like to. But I always wanted to have one…

I remember playing my Atari 65XE – great time. Loading games, watching first demos, learning BASIC and assembler. Commodore C64 when visiting friends, shocking Last Ninja. Then I had PC (286 AT 12 MHz), some friends had Amigas. That time Amiga comparing to PC was something like a miracle. .

However, I am sentimental animal and was lucky to gather some retro machines at home. I have my own old Atari 65XE and games on tapes, there is Amiga 500, Game Boy, PS2, Nintendo Dual Screen and PSP (not that retro…), but connecting them is always a challenge – cables, connectors, looking for floppies (not that easy to get sometimes). There is SIO2SD, Gotek – maybe one day 😉 Time, however, is not made of rubber and after some tries I am just tired of setting this up again and again.

As a 'die-hard’ fan on Raspberry Pi (I’ve written once that it reminds me of old old times, when you had to do lots of things by yourself) I’ve seen RetroPie long time ago. But again – connecting, configuring pads, second one when I play with my son, connecting to the TV (and then you realize that all HDMIs are already taken), chargers. Naaaah.

Eventually I’ve grown up to create my very own Arcade Bartop. And this topic will be next to describe here. I was not in rush, slowly gathering all the elements, sometimes I had to order additional, as idea changed or there was a new need. Promotion here, discount there – finally I had all! During the process one of my weak points was delaying all – I HAVE TO describe everything before I start, think it over dozen of times and I am afraid of manual work because I think I will brake everything. And because of that things that would take you week – was a month for me. Vide – putting all the wooden parts together. I wanted to quit sometimes and forget about it, but once I’ve visited Console museum and have played 1943 and after that there was no other option – I HAD TO finish.

Mistakes that I’ve made:
– MDF, not plain wood. More aesthetic, easier to paint.
– Gather elements, do, don’t overthink. I am not sending rocket to the moon…

I will translate all the parts next days, so stay tuned!

RetroPie is huge. It emulates most machines that I ever wanted to play and never was able to. Among them:

and many more, sometimes very exotic. Wonderswan, Vectrex, VirtualBoy. Most cases they are already pre-configured so you sit and play, but some of them need additional tuning.

There are dozens of 'HowTo’s on the internet, I’ve followed: https://www.instructables.com/id/2-Player-Bartop-Arcade-Machine-Powered-by-Pi/. Good looking, for two players, seems easy, well documented. BE CAREFUL, to print PDFs maintaining proper aspect ratio! I was close to make a mistake which could finally lead to failure.

Black paint as a background.

And here we have fully pro printouts directly on wood made by Omega Art z Olkusza – www.omega-art.pl – I recommend!

To make painting last forever I’ve put on the top special paint for floors, as suggested by Omega Art .

As you see – even my daughter was involved 😀

Putting all the parts together was most stressful for me. I’m not that good at hand craft and I didn’t want to ruin such beautiful paintings, so I had to plan everything carefully.

Up high cabinet without magnes. Down below work in progress connecting all the cables.

Down below putting all the cables together.

I had to somehow put screen in place…

It looks better and better.

Most stressful – have I done everything right?

But i was more than fine! No speaker covers and no marquee, yet. But believe me – even this moment was fantastic. 'I’ve done it! By myself! It works!’.

View from the back. Also important.

’Full professional speaker cover’ :D. But I was so excited then, that even when my daughter would put pink circles around them I would accept that.

That was expected – screen is upside-down 😉   Solution: display_rotate=2 in /boot/config.txt

AND HERE WE ARE!

As it was a present for my son – let him play 😉 He left Fortnite for a moment to play Keystone Kapers. His favorite, as well as Tapper.

But daughter was also amazed. No better moment for a father!

As I’ve presented that during kid’s birthday, even my father in law wanted to play River Raid 😀

Conclusion. I am damn proud and happy. For some people – 'week and I’m done’. For me – crossing another border and making dreams come true.

– My wife for being patient (many nights spent on thinking, configuring) and accepting my hobby 😀
– Kids for help, choosing bevels and that they are with me.
– Parents – especially my father for help during last stages.
– Omega Art for help.

IT IS ACHIEVABLE! Even person like me can do it!